Little Elephant's Big Parade (series)
Rocket's Firebird Rescue
Rocket is the main future ship of the Little Einsteins and the transportation of them.

Rocket is a gigantic 4-dimensional toy spaceship made out of red metal. He has a red antenna, clear blue windows, and yellow lights for eyes. He has large jet engines on the back of him with fin-like tails on them.

The inside consists of a cockpit with 4 bluish-silver seats in which the Little Einsteins sit on. There is a gray and red steering wheel that resembles the handle of a slingshot. He has a dashboard all over the front of the inside covered in buttons and switches with different colors. When the Little Einsteins are inside him and the camera is on the outside, you can see them through the glass in his windows.

There is gray metal on the bottom in which red wheels sprout out from it. Rocket appears to have a pointy piece of metal on the top resembling a fish's top fin.

He can't talk, so he usually communicates by making the sound of a marimba and shaking his antenna. Rocket's grandmother looks just like him but she is pinkish-purple in color and Rocket is however red. When he screams, he sounds like a musician insanely playing a vibraphone really fast. He also sounds like someone making noises with the vibraphone's keys when he gets the "Rocket Hiccups"

He is nice and friendly, he is trustworthy, loyal and a great friend, and caring for his friends, including his grandmother when he made "Rocket Soup" for her.

He appears in every episode of the series but plays a minor appearance with everybody but Quincy in Quincy and the Magic Instruments. 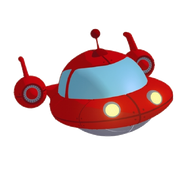 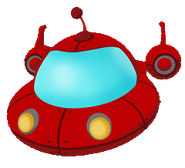