Start a Wiki
Little Einsteins Our Huge Adventure is a 2005 Musical adventure feature-length movie from Walt Disney Pictures and The Baby Einstein Company The film would later turn into the TV series Little Einsteins The whole Feature Movie is split into two episodes at the end of Season 1.

The adventure begins when the four Little Einsteins hear beautiful musical playing from afar and seek out its source: a leaf-munching caterpillar with whom they journey toward a new life as a butterfly. Along the way, they ride a musical roller-coaster, encounter a musical storm, and meet varying situations that call into play their skills and interests. 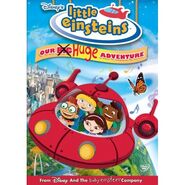 Retrieved from "https://littleeinsteins.fandom.com/wiki/Our_Huge_Adventure?oldid=11140"
Community content is available under CC-BY-SA unless otherwise noted.