Come On It's Time to Climb Aboard

It was a pitch pilot advertisement to pitch the series to Disney (as stated by Lead animator Frank Summers).  It premiered on multiple Baby Einstein DVDs and Playhouse Disney series DVDs including Jo Jo's Circus.

The stayed tuned bumper for Version 1 and Version 2 (Baby Monet 2005 VHS only) had Leo, Annie, Quincy, and June sitting in Rocket.

Releases for the 2nd Trailer

The first version of the pitch pilot was a 30-second advertisement of the characters at a possible playground. An announcer talks about the series at the beginning and end. In the middle, we get the first look at 4 children (became Leo, June, Quincy, and Annie) playing on the playground. We see June, Leo, and Annie on a roundabout singing to the jingle. Then we see all the characters swing into the screen exiting to the left, then re-entering to the right giving closer details.

The second version of the pitch gave us the official character designs of Leo, Annie, Quincy, June, and a simpler version of Rocket. It had a male announcer unlike the first and had more clips. We see the gang in the Starry-Night in most character scenes. Some things that changed were the interior of Rocket. In this pitch we saw Quincy in the front seat with Leo and Rocket's seats were green. Quincy strangely had very dark gray sleeves and they both had no ear detail unlike in the official. It kept the jingle from the first pilot. It was still announced as "Little Einstein".

There are multiple sketches that were not animated, which showed character development. (etc. Annie having blue sleeves, Quincy with a blue and white shirt.)

Come on! It's time to climb aboard and meet the Little Einsteins. 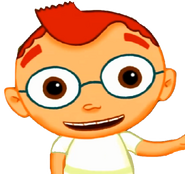 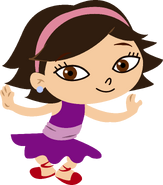 Rocket flying around the Eiffel Tower. Notice how he uses his design from the second trailer
Add a photo to this gallery

Retrieved from "https://littleeinsteins.fandom.com/wiki/Little_Einstein_(Pilot)?oldid=24360"
Community content is available under CC-BY-SA unless otherwise noted.