Conducting, helping, animals, his friends, Being a leader of the Little Einsteins

Little Elephant's Big Parade (series)
Rocket Firebird Rescue
Leo is the main protagonist of Little Einsteins. He's the team's leader and serves as a conductor. He's voiced by Jesse Schwartz and his singing voice is provided by Harrison Chad.

Leo is the leader and the oldest of the Little Einsteins. He pilots Rocket. He is the older brother of Annie and his main talent is conducting. His most precious object is his father's Conductor Baton. He uses the baton to conduct the music to the right beat.

His full name is Leonardo and prefers to call himself Leo for short. He can be seen using this name on the old website.

Leo is a peach (tanned fair) skinned young boy with green big round open eyes, and red spiky hair, he was born with fair skin but he got tanner due to efficient outdoor activities. He wears a black short-sleeved shirt with an orange stripe above the middle, and orange khaki shorts with pockets attached. He is the only member to wear glasses. His glasses are cyan green/greenish-blue. His shoes are black and orange with white strings and white bottoms.

In Our Huge Adventure, all the orange on his clothing was darker, but was later dimmed for an unknown reason. Faint sights of the original color can be seen in reused animation during the first season and during the blast off.

Leo is a kind, caring and respectful boy, who's always there to help. He's brave and confident in helping his friends. He leads the team in the right direction. Like all of the gang, Leo is scared of spiders and bats. (Our Huge Adventure)

His friends are Annie, Quincy, June, and Rocket.

Leo also has his friends, but they aren't human: Melody and Silly Sock.

Relationships with other Characters

Quincy is Leo's friend, Leo likes to hang out with Quincy. He conducts Quincy while he plays his instruments and helps him to not be afraid of his fears.

June is Leo's friend. Leo will do anything for her. If June is hurt, scared, or sad, Leo will be there to cheer her up. In turn, when Leo is feeling scared or sad, June will comfort him, being the good friend she is. They're both the same age.

Annie is Leo's younger sister. He takes care of her and watches over her. He teaches her how to fly Rocket, meaning he trusts her. His trust worked because Annie saved Leo, Quincy, and June in Annie's Solo Mission. He likes to scare her when she gets the hiccups. 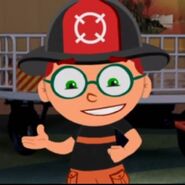 Pirate Hat with a hook 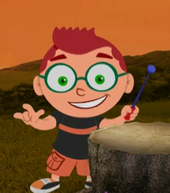 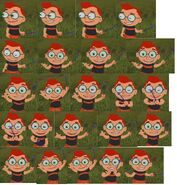 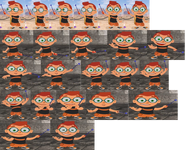 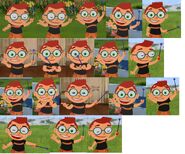 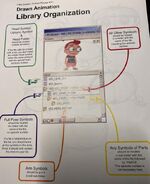