Katschai is a former villain in the special Rocket Firebird Rescue that tries to take away all the Magic by capturing Firebird in a cage.

He is a mean ogre who captures the Firebird. He formerly disliked music until Firebird sprinkled her "Music Power" onto him.

He is a rude ogre who spent ages to capture the Firebird. He disliked music and rages when the Firebird made music in Russia. His task was to take all the music away from Russia till he succeeded his task. Then the Little Einsteins came and saved the day. 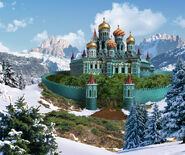 Retrieved from "https://littleeinsteins.fandom.com/wiki/Katschai?oldid=11239"
Community content is available under CC-BY-SA unless otherwise noted.